Finding the main idea is one of the most important reading skill that a reader should develop.If the reader finds the main thought,it means that the reader understood what he/she had read.

Let's know how to get "main idea" 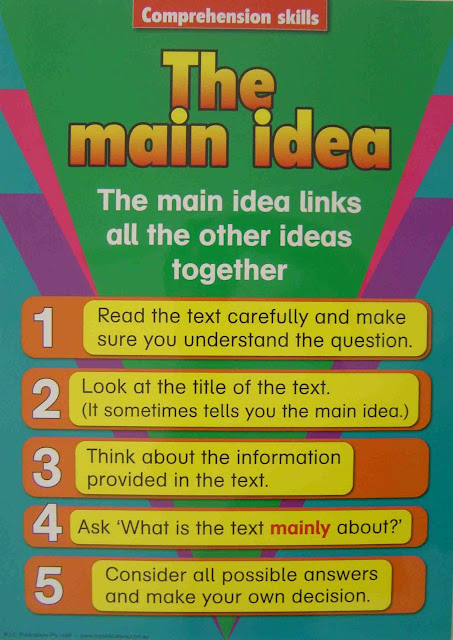 Where can we find the main idea?


Let's have an exercise


Tell the main idea of the article:

English is now considered as the most valuable language in the world.People all over the world take every chances to know how to speak English.


The Japanese community has just started to accept the idea of learning English.In fact, a so-called English crisis is starting to alarm people who had never dared to know the language at all.This is in contrary to the Filipino community.Filipinos are known to be multilingual,meaning they know different languages.English is never new to the Filipinos,even ordinary people understands and can communicate in English.


To address to Japan's  maximized demand of learning English and to make use of the Philippines' knowledge of the language, Lakeside International Academy Online Tutorial Services was established.


The said school offers English lessons to both Child and Adult Japanese through Skype.It is served by Filipino teachers who are trained thoroughly.
The joint force of Japan and the Philippines to equip people with a good knowledge of English not just establish a good relation between the two countries but also sets a good example of unity amidst the conflicts happening in the neighboring places.


Why fight for our differences when we can unite with our common interests?Instead of battling for treasures which will just rust and decay in time,let's put our attention to productive endeavors and just like Lakeside International Academy,let's use English to settle the gaps between countries and thus, make this world a much enjoyable place to live in.

Find out the answer and find out more about the article by enrolling in this website_www.lsiacademy.com
Trial lesson is free!
Posted by lsia.blogspot at 3:01 AM